nothing better than an obscure holiday. especially one that Hallmark can capitalize on so easily.

April 21st, Alfred G. Packer Day - recognizes one of the few men to be convicted of cannibalism in the U.S. He ate his other prospector companions after they got lost in the Colorado Rockies. Packer claimed they died of natural causes before he ate them, but modern forensics has proved that at least some of them had been murdered. 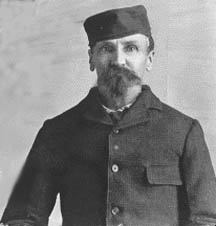 In the Colorado Rockies
Where the snow is deep and cold
And a man afoot can starve to death
Unless he's brave and bold.

Oh, Alfred Packer
You'll surely go to hell
While all the others starved to death
You dined a bit too well.

---from The Ballad of Alfred Packer

gotta love the stuff i dig up in the Crime Library.
Brought to you by the name Chariot13 and the time 1:25 AM 2 comments:

so, lent is almost over and i've only posted twice about my goal of giving up junk food. some of you may think this is because i failed. you would be wrong. i think instead it's just become part of my life so i haven't really had anything interesting to say about it. now that easter is upon me, i have started thinking about eating junk food more. i just know that if i want to have it in a couple of days, i can. this thought also scares me. i am worried that once i start eating it again, things will get bad. it's hard, because i really haven't lost as much weight from doing it as i though i should have, and things like that fuck with my brain. the true test, however, will be getting on my mom's official electric weight watchers scale, because i bought a cheap manual one that i don't trust. i was home a few weekends ago and weighed myself then, so i will have something to compare it to when i go home again tomorrow.

also, i haven't worked out in a long time because the past two weeks i was too busy getting down with the sickness. i'm pretty sure Bally's doesn't really appreciate their members coughing and snotting all over their eliptical machines. when i get back from easter weekend, though, i've got to get my ass back in gear because there are weddings and graduations and shows and beach weather to think about. if that doesn't motivate me, nothing will. so i may have succeeded at my short term goal, but i now have to use it to help me achieve what i want for the long term.


"just take a breath, jump over the side"
Brought to you by the name Chariot13 and the time 4:17 PM No comments:

a little Coldplay and a lotta cold

blaaaa. i have been sick all week and it sucks. BUT, luckily it didn't hit fully until AFTER Coldplay. not like it would have detered me from going. i would have gotten there with a wheelchair and an IV in my arm if i had to, and it would have been absolutely worth it. just an amazing concert. everything worked out perfect too. alicia and i met each other in the parking garage and had a great dinner and then got to the arena in time to watch some of Richard Ashcroft and actually hear "Bittersweet Symphony" in person, so cool.

before we got there i was so worried about the seats because they were "side view" which could have meant we were looking at speakers or something, but instead it just meant we were on the side but still really close. i definitely made the right choice between those and the other available seats - straight on view but in the nose-bleed section. i'll let you decide for yourself though, because here are some of my pics. enjoy! =) 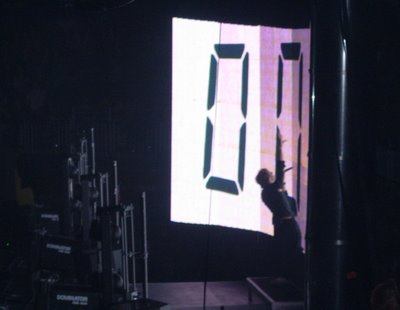 encore songs: Swallowed in the Sea, In My Place, Fix You 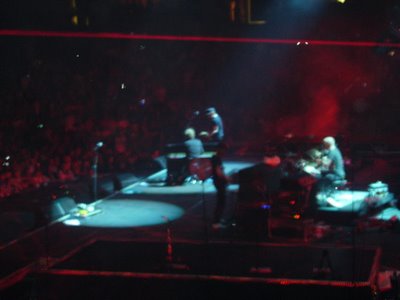 best songs: Fix You, The Scientist and Yellow (they dropped huge yellow balloons from the ceiling that sprayed sparkly gold confetti when they popped and Chris Martin popped the last one on the stage by doing a belly flop on it, then he finished the song) 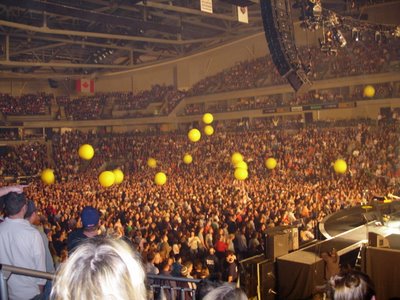 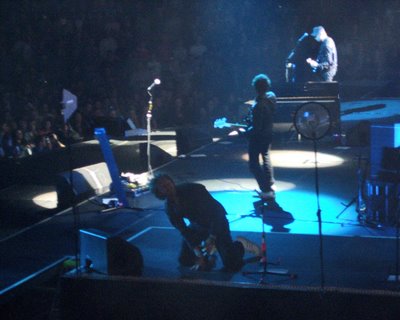 best non-music parts: Chris Martin's interpretive dances, getting waved at by Chris Martin, and the whole band coming to the edge of the stage to take pictures of the audience.

alicia and i were so taken with how fan-friendly this band is. they didn't talk much in between the songs, which meant more music time, and when they did talk it was to thank us for being amazing, tell us how much they love New England and ask how everyone was doing (like that was even a question!).

beautiful music made by nice boys, what else could a girl want?
Brought to you by the name Chariot13 and the time 4:57 PM 1 comment:

a man in uniform

in honor of the opening day of baseball, i've posting a link to my favorite player ("not a bad piece of ash, huh? the bat. talking about the bat").

one thing (of many) my mom taught me was that there's just something about a man in uniform.

the fcc can derelicte my BALLS

comedy central just bleeped out the word "balls" from Zoolander, but in the past week i've been the unwilling witness to the slow-motion loogie hawk from "Flavor of Love" about a zillion times on every entertainment clip show. and don't even get me started on the 50 ads i just had to sit through for girls and guys gone wild (a topic that needs a post all its own). i think we have bigger problems here than hearing about someone's cohones.

bottom line: i am confused by the fcc.


bottom, bottom line: there's more to life than being really really really good looking.
Brought to you by the name Chariot13 and the time 11:02 PM No comments: 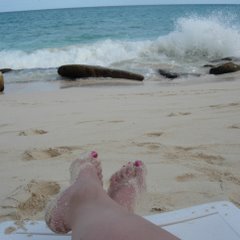